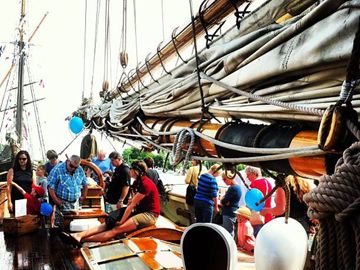 On board the Pride of Baltimore II.
Niagara This Week – St. Catharines
ByScott Rosts

Visitors to Port Dalhousie can climb aboard history this weekend.

“We’re delighted to tie into the 1812 Bicentennial celebration. It raises the profile of the event and ties into a major piece of our history,” said Little. He said they were also fortunate to tie into the Tall Ships 1812 tour that was launched in Brockville June 14. The tour sees vessels make the trek to Great Lakes ports across the province this summer, with stops in Brockville, Toronto, Hamilton, Sault Ste. Marie, Georgian Bay and southwestern Ontario.

The work to bring the vessels to Port Dalhousie not only included forging partnerships to host and organize the event. Little said key tour sponsors came forward to help ensure it happens. ASI Group, for example, helped ensure there was adequate room for the vessels to navigate their way through the harbour, while others helped cover the costs to bring and house the ships for the weekend. The benefit there, he said, is that a portion of the ticket proceeds will be donated to United Way St. Catharines and District.

Better yet, said Little, it will be extremely affordable for those attending to tour the ships. Admission will be $2 for children ages 3-12 and $5 for adults ages 13 and up, at the gate. Visitors will have the opportunity to climb aboard the three ships, enjoy live entertainment and interact with the 2nd Lincoln Militia, which will have an encampment in the centre of the action.

The vessels themselves feature a little bit of history. The Pride of Baltimore II and Lynx are both War of 1812 replicas, while the Unicorn has the distinction of being the only tall ship in the world with an all-female crew — women that are drawn from families of active military personnel. It even has its own piece of war history, as it was built in 1947 in Holland from German U-boat metals.

“We wanted to explore the War of 1812 aspect of it, but the Unicorn also gives us a feel-good story,” said Little. “It’s a good collection of ships we’re having and it should be interesting for those who come out to see them.”

The event will be held at the Lockhart Point Park, beside the Port Dalhousie Legion, which will be hosting a barbecue, as well as a fish fry Friday night. The programming is being run from 10 a.m. to 6 p.m. on Saturday and Sunday. Opening ceremonies took place Saturday morning and featured local dignitaries and the ships’ captains, out front of the Legion.

While the ships will only be docked at Port Dalhousie for the two days, organizers say they will transit the Welland Canal over the following 24 to 48 hours as they head to the U.S. Community members can catch them travelling through the locks of the canal starting on July 1.

Parking will be limited at Lakeside Park, due to the Lions Club’s annual carnival, so the public is encouraged to park and walk from several locations, including Michael Rennie Park, Jaycee Gardens, Port Dalhousie Pier Marina/Yacht Club, Bill Burgoyne Memorial Arena and surrounding street parking. Accessible Parking will be at the Legion and attendants will be directing traffic to the best areas. For more information, visit www.niagara1812tallships.ca.